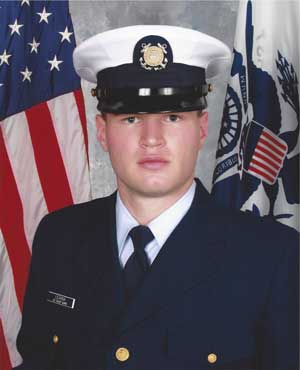 SN Anthony Leanna isn’t just serving his community Anthony is a former member of the Coast Guard IT security unit in Arlington, VA.. At age ten, Leanna started “The Heavenly Hats Foundation,” a program designed to provide new hats to patients who had lost their hair to cancer.  The now widely successful non-profit organization started small in 2001 when Leanna’s grandmother was diagnosed with breast cancer in their Wisconsin hometown.

“The idea for ‘Heavenly Hats’ came to me over Easter break after visiting my grandmother during her breast cancer treatment,” said Leanna. “I saw firsthand the seriousness of the disease, and the effects it has on individuals.”

To first get the word out about “The Heavenly Hats Foundation,” Leanna placed donation buckets in local establishments around Green Bay with accompanying flyers that asked customers to contribute new hats to help the cause. The community response was extremely supportive, and soon the Leanna family basement was overflowing with hats.  As the Foundation continued to grow, so did the attention it received from the media.

“I started doing little interviews for local television stations, hoping to get the word out to people and companies in the area,” said Leanna.  Soon enough, the mounting interest in Leanna’s “Heavenly Hats” began to catch the eye of national news groups across the country.  By making special appearances on programs such as ABC’s “Volunteers Across America,” Leanna was given the opportunity to continue the expansion of “Heavenly Hats”.

“The media has been wonderful to me and has helped in a huge manor to make ‘Heavenly Hats’ such a great success,” said Leanna.  In December of 2002, Leanna was recognized by President Bush as a recipient of the President’s Student Service Award – an honor that recognizes students for accomplishing a certain standard of community service excellence. At that point, Leanna had collected over 6,000 hats – with styles ranging from funky jester hats to more classic baseball caps – that had been donated to over 60 hospitals and clinics around the world.

The President’s Award isn’t the only recognition Leanna has received for “Heavenly Hats.” He has been the recipient of The National Caring Award, The National Jefferson Award, the ABC Real Life Superhero Award, and numerous others. Though Leanna is currently stationed at the Yard, “Heavenly Hats” is still going strong thanks to help from the company’s Executive Board of Directors. With Leanna’s mother, DeeAnn, heading up the foundation as President and Chairman of the Board, “Heavenly Hats” continues to receive support from companies and individuals nationwide.

The Leanna’s have now donated over 4 million hats that have improved quality of life.  “I have met with many patients and received many emails and letters from them, and without that contact, ‘Heavenly Hats’ would not have been as successful as we have been,” said Leanna. “It’s their courage to get through this horrible disease that inspires us to help as many people as possible.”

Anthony now resides in Green Bay and is married to Sarah Leanna and now have a two year old son Bryan and beautiful baby girl Charlotte.